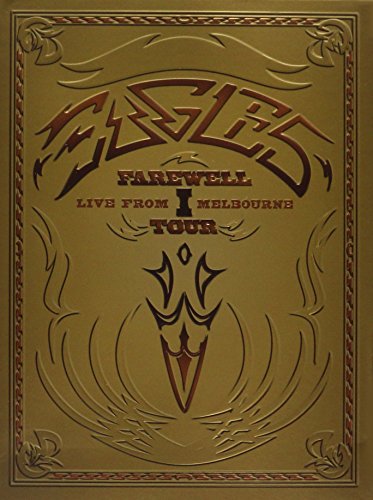 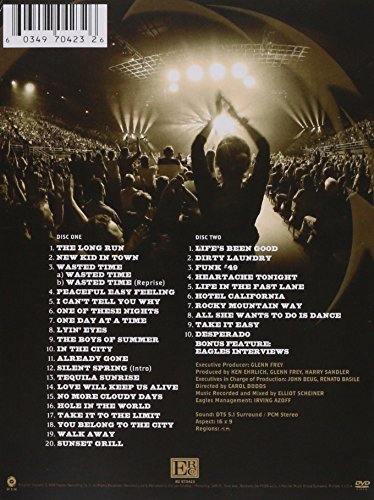 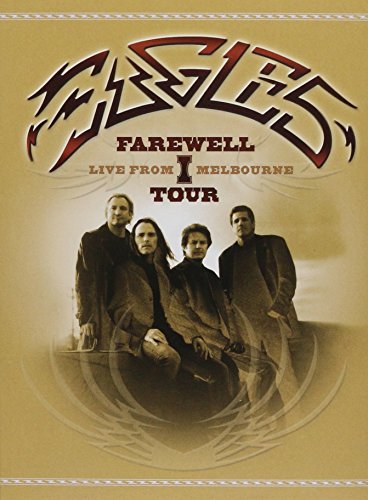 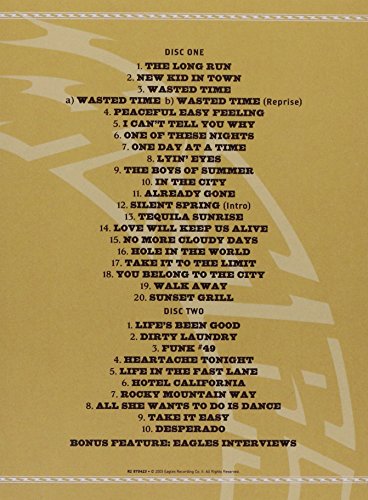 Without doubt, the Eagles are one of the all-time biggest acts in popular music since the dawn of the rock’n’roll era. The band’s roots go back to their role as defining artists in the phenomenally popular Southern California rock scene of the ’70s, a decade in which they delivered four consecutive #1 albums. Their momentous 2004 farewell tour filled stadiums around the world, and this 2-DVD set captures one of the most stellar events from that now-historic global sweep. Track Listings: Disc 1: Long Run, New Kid in Town, Wasted Time, Peaceful Easy Feeling, I Can’t Tell You Why, One of These Nights, One Day At A Time (New Track), Lyin’ Eyes, Boys of Summer, In The City, Already Gone, Tequila Sunrise, Love Will Keep Us Alive, No More Cloudy Days (New Track), Hole In the World, Take It To the Limit, Disc 2: You Belong to the City, Walk Away, Sunset Grill, Life’s Been Good, Dirty Laundry, Funk #49, Heartache Tonight, Life in the Fast Lane, Hotel California, Rocky Mountain Way, All She Wants To Do Is Dance, Take It Easy, Desperado

Thirty songs, spread out over two discs and well over two and a half hours, with fine performances, great sound, and good visual direction: it’s all here on Farewell 1 Tour, a documentary of the Eagles’ 2004 concert in Melbourne, Australia. At one point, the veteran band seemed unlikely to even make it to the new millennium, but here they are, mostly intact, with a string of hits dating back more than three decades. The majority of them are performed here, from the earliest (“Take It Easy,” “Desperado,” “Peaceful Easy Feeling”) through “Hotel California” and “Life in the Fast Lane” and right up to “Love Will Keep Us Alive” (from Hell Freezes Over, their most recent recording with new material on it); there are also hits from Glenn Frey, Don Henley, and Joe Walsh’s solo careers, and a few new songs as well, including Walsh’s “One Day at a Time” (an earnest ode to his new-found sobriety) and “Hole in the World,” Frey and Henley’s moving, almost gospel-tinged reaction to the events of 9/11/01. Guitarist Don Felder, who split acrimoniously with the band in 2001, isn’t much missed, as replacement Steuart Smith plays the parts just as Felder did–i.e., pretty much exactly as they were recorded (indeed, pristine recreations of the studio versions of their songs has always been a hallmark of the Eagles’ live shows). As for the somewhat cheeky title, well, there’s always been a certain smugness to the Eagles’ sense of humor, and it’s no different this time, as Frey doesn’t even pretend that there won’t be a Farewell 2 Tour in the future. And why not? These are good songs, played beautifully by the quartet (plus supplemental musicians) to audiences that love them. Bonus material is limited to perfunctory interviews with the band. –Sam Graham